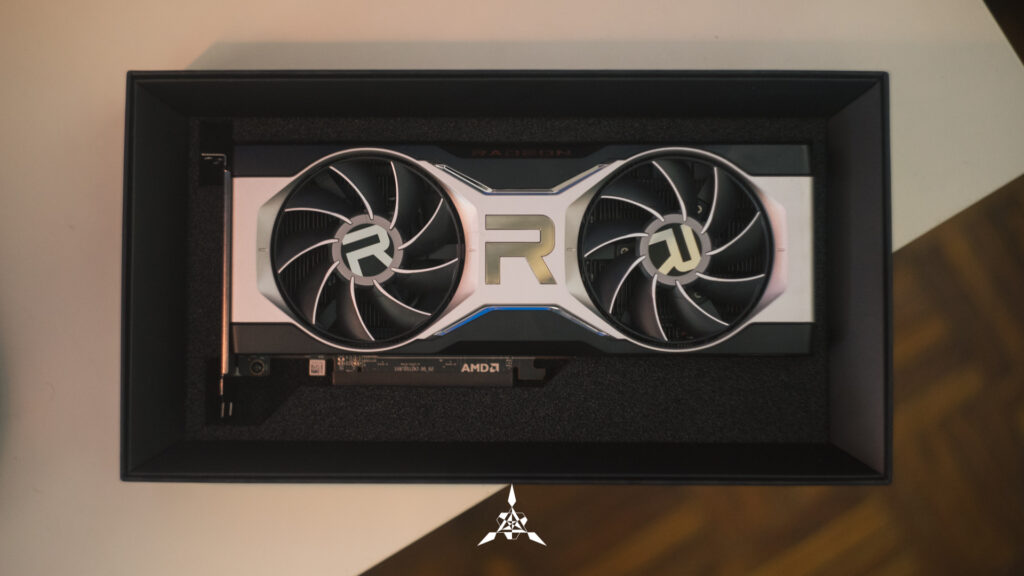 After we built the PC, the only thing we couldn’t protect was the GPU, because it was scarce. Fraudsters and bitcoin miners have become a global problem. I didn’t want to put my installation back in the box. Instead, we asked AMD and another brand to test their GPUs – yes, we are slowly exploring the component space. With that in mind, this article looks at one of Radeon’s recent announcements: The RX 6700 XT, a GPU that AMD says can keep up with the RTX 3070 and has good potential in games at 1440p resolution – which of course is what we’re testing in this short review.

The reference Radeon RX 6700 XT comes in the signature red color with gray trim and the R logo on the fans. It has the same design as the 6800 and 6900 cards, except this card only has two fans. These fans are specially designed dual-axis fans with a no-speed fan mode for quiet operation under heavy load. Between the PCB and the fans, you can see that the GPU has a fairly thick heat pipe and blades to dissipate heat in the system.

What I really like about the GPU when I hold it in my hands is that it feels very solid, thanks to the cast aluminum frame that holds everything in place.

The Radeon RX 6700 XT is aimed more at mid-range GPUs, but it can still compete with Team Green’s 3070. But that’s not true, the RX 6700 XT has the following specifications:

Since this is our first rodeo and GPU test, we’re going to keep it simple and focus on one aspect that’s important to most users who buy this GPU: gaming. To test this GPU, we used the following specification as a test environment:

Here’s how we ran the GPU benchmark: we used 8 games, including new and current popular games, and tested them at 3 different resolutions: 4K, 2K, FHD and all games were set to Ultra Settings. 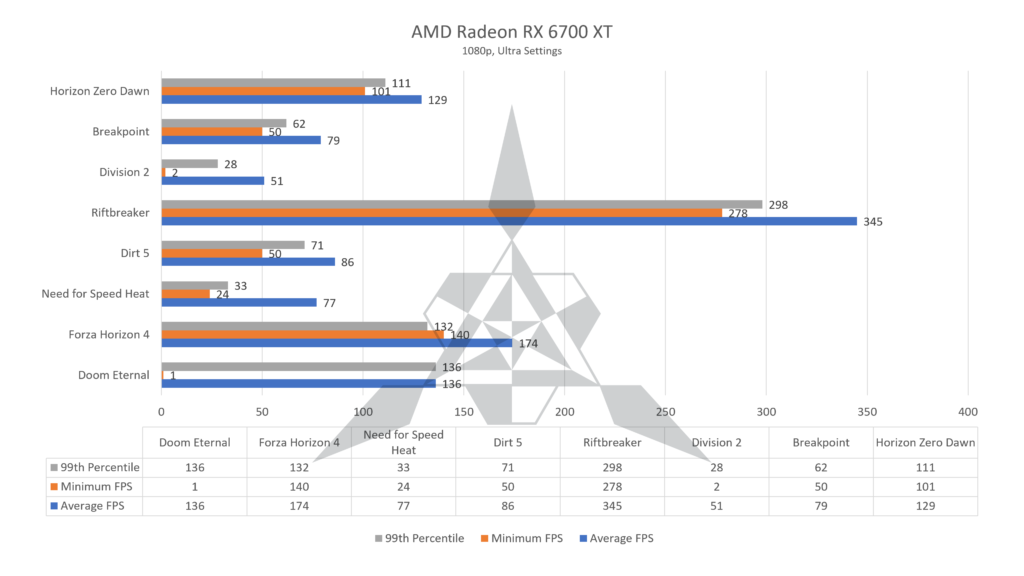 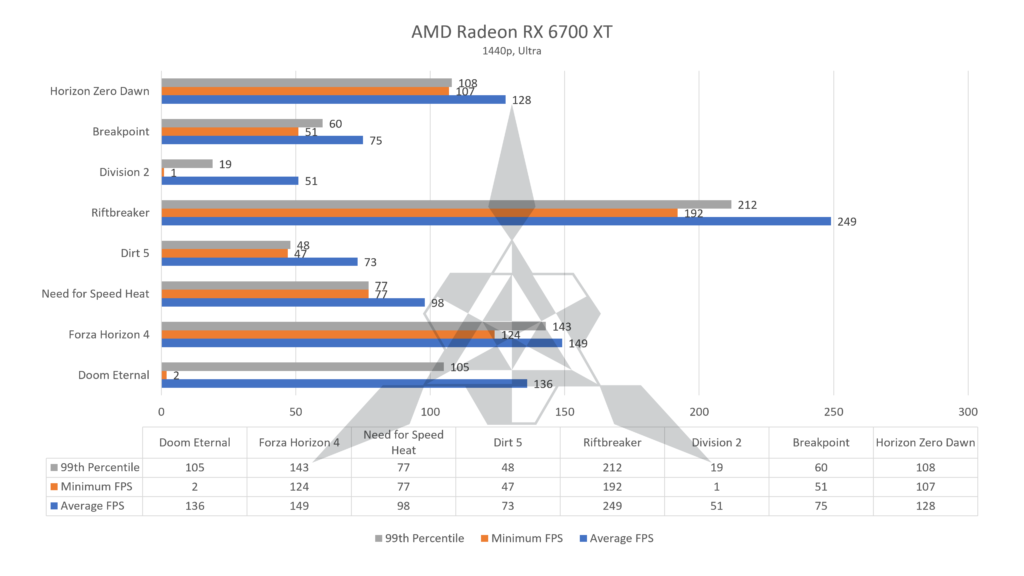 Let’s go to 1440p. The consumer market is aiming for better performance here, as it looks great paired with a more powerful monitor. Still, the results aren’t bad either, but it’s not something that will surprise consumers like a competing card – the RTX 3070 puts on a better show. 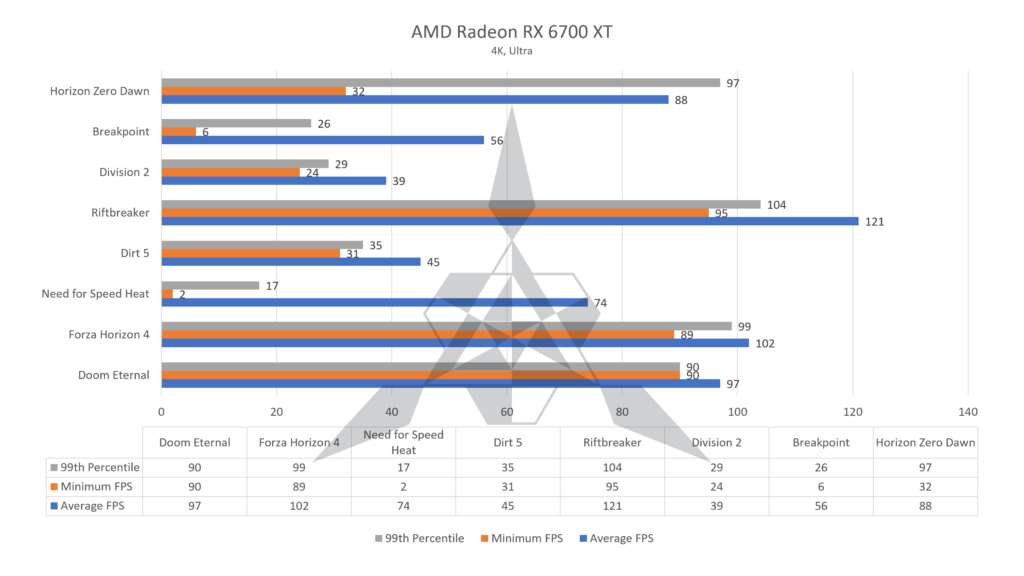 Finally, in 4K games you’ll see this GPU struggle with 90%+ performance in most games with Ultra settings all year long. You can play, but the card has a hard time putting on a good show. The scores range from 50 to 80, and only one game, Riftbreaker, has an average framerate of 121.

Below are three different benchmarks based on resolution and graphics settings compared to the RTX 3070. By most measurements, you can see that the RTX 3070 is the clear leader, and you might be surprised to learn that the RTX 3070 has 8GB of GDDR6 memory. But the GPU has a better memory interface width of 256 bits versus 128 bits for the 6700XT, and the Ampere architecture is already so advanced that even ray-tracing games look great where AMD fails due to lack of support.

In terms of gaming performance, the Radeon RX 6700 XT performs well in 1080p games and at best average in 1440p games, but Team Green’s offering is certainly not dismissed, but the 3060 could be a good competitor. Unfortunately, if you need more detail in ray tracing and DLSS games, you have to put NVIDIA on the throne, as AMD still comes up short in some games on the list, including games like Cyberpunk, Metro Exodus, and many others.

Even if you could buy one (which unfortunately you can’t), it’s best to opt for the Green team’s GPU at this point – detail and accuracy are more important than anything else. But if you want a GPU that’s only good for games, and 1080p is all that matters, the Radeon RX6700 XT isn’t a bad choice. The only thing we haven’t been able to test yet is the potential of the card in FidelityFX, we’ll have to wait until June for that, but we’ll see if we can get it later. 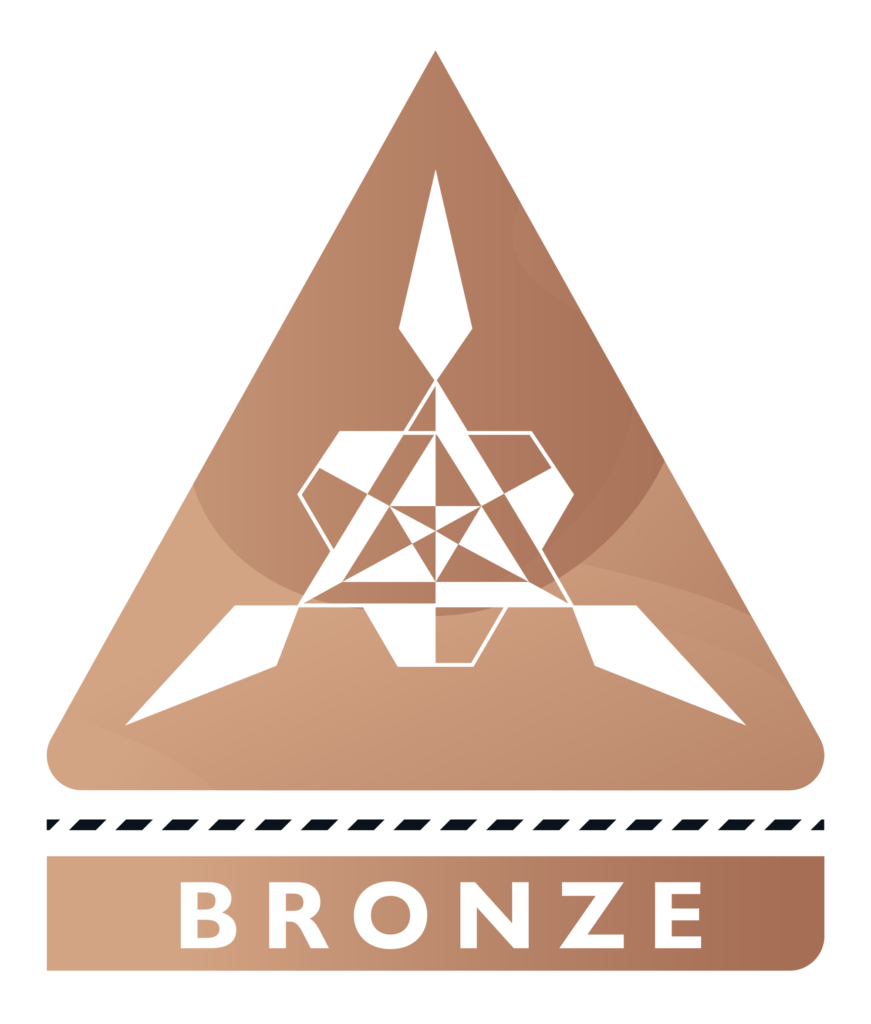 Special thanks to AMD Malaysia for providing the Radeon RX 6700XT for testing.

This source has been very much helpful in doing our research. Read more about rx 6700 xt vs rtx 3070 and let us know what you think.

AMD’s recent announcement of the Radeon™ RX series has generated a lot of excitement in the PC gaming community. The company’s new RX Vega series represents the fruition of many years of hard work in GPU design, and it’s expected to be a strong competitor to NVIDIA’s GeForce GTX 10 series GPUs. We wanted to give our readers a preview of the Radeon RX 6700 XT—one of the flagship models in AMD’s new lineup—and give you a sense of its performance. Is the AMD Radeon 6700 XT good? Yes it is, very good. It outperforms Nvidia’s GTX 1050 and GTX 1050 Ti in every test by a noticeable margin, which is no small feat. In fact, the only DX12 game where the RX 580 and GTX 1060 don’t experience a significant performance gap is Battlefield 1, which the RX 580 wins by a hair. It’s also worth noting that the RX 580 suffers with some coil whine, which appears to be a hardware issue, and not a driver issue.

The Radeon RX 5700 XT is AMD’s newest GPU for gaming. While it’s not as powerful as the new 20-series Nvidia GPUs, it still makes an excellent gaming card. The 5700 XT is one of the few GPUs to have the ability to render real-time ray tracing. If you were waiting for AMD’s response to NVIDIA’s RTX lineup, you have to wait no more: the RX 5700 XT is here. With a starting price of $450, it’s more expensive than AMD’s top end cards from the previous generation, and it doesn’t offer the kind of incremental performance improvement that previous generational leaps have. (At least not at standard 1080p gaming.) But that’s not its real competition: this is AMD’s answer to the RTX 2060, a card that’s not meant to be used for 4K gaming, but for 1440p and 1080p gaming. And in that sense, the RX 5700 XT may be the better performer, especially for 1440p gaming.

The only thing more important than your gaming monitor is the graphics card powering it. If you’re in the market for a new gaming monitor, you’re probably also looking for a new graphics card to complement it. AMD’s Radeon RX 6700 XT is proving to be a great choice for gaming monitors, with a powerful GPU and enough power to cover most game titles. AMD’s line of Radeon RX video cards has been improving their features at a steady pace each year. Most enthusiasts agree that the RX 6700 XT release date is July 10th. The big question is, do you need to upgrade? In a word, no. If you already have an RX 6400 XT or Nvidia 1080, you don’t need to upgrade. If you have an RX 5600 XT, you don’t need to upgrade. Only if you have an RX 5600 or lower should you consider upgrading.

Passing a recommended 300-430 certification exam is a real challenge. To be honest, without a solid foundation, it’s pretty hard to feel comfortable in all the skills described. However, the 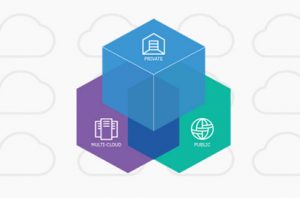 To protect your privacy in the cloud, choose the right CSP, you have an automated and centralized system that can store all kinds of secrets. Most of our data is